My dad came home from the hospital today. He’s in terrific spirits and already well on the mend, though there are lingering effects from the surgery. For one thing, his voice has been temporarily pushed into falsetto, making him sound a bit like Hyacinth Bucket; for another, he’s preferring soft-to-swallow foods, to save his poor cut-up throat some effort. I wanted to treat him to a nice light-but-special lunch when he came home; my farmer’s market trip yesterday yielded, among other things, a bag of English peas and a purple-tinged bunch of green garlic. So I made soup.

This is, more or less, early spring in a bowl. Fresh peas are at their sugary plump best now, with a crisp starchiness that frozen peas just can’t match. I’m lazy and buy my peas shelled–for a premium–but supposedly, shelling the peas is the kind of meditative kitchen task people wait all year for. As for the green garlic, it’s not an ingredient I often use, since it only appears at farmer’s markets and must be used quickly. It’s also sometimes hard to spot, since in its smallest and sweetest form it looks like a bulbous scallion. As it grows, the bulb becomes more pronounced, and the flavor intensifies. The garlic I bought was more or less fully grown, but not yet cured and concentrated the way our more familiar garlic is. Either way, it’s a great find for delicate dishes, with all the sweetness and roundness of older garlic and none of the spicy aggression.

I’m not usually one for minimalism and refinement in the kitchen. But today I wanted simple. Clean. Peas and green garlic at the front. I sauteed the garlic quickly in oil, then added peas, water, and a few featherweight flavorings–lemon juice, chili flakes, a mint sprig. The peas got cooked gently, just until they lost their last hint of chalkiness and became soft enough to puree. Then I stuck an immersion blender in the pot and whirred away, watching the soup get slowly thicker and minty-greener. A couple slices of bread, a tangerine for each of us, and voila–lunch in 20 minutes.

We had our soup in mugs, which I highly recommend. There’s a comfort factor to this soup–as airy as it is–that makes it perfect for sipping over a newspaper. It also stayed wonderful as it cooled to room temperature, which makes me think it would work just as well served cold. I suppose you could add a drizzle of cream or a swirl of yogurt, if you wanted, but I wouldn’t recommend it. With something this delicate, let the vegetables do the talking. 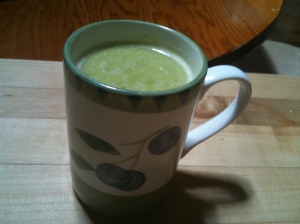 END_OF_DOCUMENT_TOKEN_TO_BE_REPLACED

I tried something new today.

With various comings and goings over the past few weeks, I haven’t had much chance to take in the local farmer’s markets. I feel like I’ve been missing a bunch of blink-and-you’ll-miss-it produce. So when I stopped by Trader Joe’s on the way home from work and noticed they were selling fiddlehead ferns–at $4 for a generous half-pound, a relative bargain–it felt like a nudge from the kitchen gods. Cook something seasonal. Try something you’ve never made before.

Fiddlehead ferns–so named because they’re shaped like the scroll of a violin–are ultra-seasonal, showing up for about three weeks in the middle of spring. They’re also ultra-expensive–at the Ferry Building, I’ve never seen them for less than $18 a pound. So I’d never bothered to give them a go before. Now that I had a bag of them, I had to figure out what to do with them. On a weeknight, ambitious and overly fussy preparations were out–I needed something simple and filling. So I decided to swap them into my favorite preparation for broccoli or brussels sprouts: sauteed with ribbons of prosciutto and finished with a sprinkling of crispy garlic. It’s the kind of foolproof saute I absolutely adore, because it’s decadent, nutritious and lightning-fast to prepare.

Having now tried fiddlehead ferns for the first time, the best way I can describe their flavor is…green. They taste exactly the way I imagine the color green to taste. I’m not entirely sold on whether that’s a good thing. The texture reminded me of asparagus, which I wasn’t thrilled about; after they were cooked, they developed a briny aftertaste and a mustardy tang, which I wasn’t expecting. Next time I’m not sure I’d use them as a starring vegetable; I might relegate them to the background, as a subtle flavor player and a pretty visual flourish. That said, I can definitely understand the fuss–fiddlehead ferns are romantic-looking, available only briefly each year, and delicately flavored in a way that screams spring.

So did I fall head over heels for fiddlehead ferns? No. Will I go out of my way to cook with them again? Probably not. Did they make a perfectly serviceable weeknight dinner, glazed with olive oil and tangled up with crisp prosciutto and golden garlic nuggets? Yes indeedy.

END_OF_DOCUMENT_TOKEN_TO_BE_REPLACED

The power of a dollop

It’s such a shameful cliche to say it’s all in the details. But cliches achieve their status for a reason: they’re most often true.

Back in college, I took pride in my lack of detail-orientedness. (Detail-orientation?) I was practically detail-averse. I’m an artist, I said. I don’t have brain-space for such things. But somewhere in the transition to the working world, something happened. I became…organized. I began obsessing over minutiae. I started color-coding things.

Well, maybe organized isn’t the right word. My bedroom floor is still blanketed with clothing, and my desk at work is shingled willy-nilly with paper. And truth is, I’ve always been a perfectionist of the highest order; I just didn’t always know which details to tweak to catapult my projects ever-closer to perfection. But now I’m figuring these things out. I’m zeroing in on the little things. I’m learning.

Which brings me to pesto. 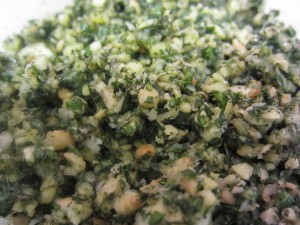