I learned to knead from my mother. I remember her beckoning me over one day and showing me how she worked a mass of bread dough back and forth across the counter. She put my hands on the dough, explained her method: push the dough forward with the heel of one hand, pull it back with the other hand. Push right, pull left. Push right, pull left. I practiced alongside her, pushing and pulling the dough, until the movement worked its way into my muscles and became a reflex.

It’s a funny memory, because when I was first teaching myself to cook, I always imitated my father first. He’s an extravagantly creative cook, the kind of cook who barely ever glances at a recipe. He’s great at making kitchen-sink stews, pulling out the entire contents of the crisper drawer and the spice cupboard and having his way with all of it. I’m my father’s daughter in so many ways, and fundamentally my cooking temperament matches his. I have limited patience for recipes and rules, and an overwhelming tendency to tinker and embellish. For a long time I stuck stubbornly to that, insisting that it was the way I was made.

But as I’ve gotten older, I’ve found that my mother’s way of cooking has value for me too. She’s more deliberate in the kitchen, more of a planner. She has a drawer of recipes that she consults regularly, and keeps a stable of favorites in heavy rotation. Where my dad is creative, she’s curious; she’ll seek out an existing recipe to learn the techniques, then adapt it to what she likes and has on hand. She also bakes, which my father doesn’t really do, because the precision and deliberateness required come more easily to her. Slowing down like this isn’t natural for me, but I think it’s good. I’ve expanded my repertoire of dishes, adding things that require a bit more forethought and deliberateness than a kitchen-sink stew. I’ve realized that repeating recipes, and learning a few standbys to make repeatedly without thinking, are things to celebrate rather than hang my head over. Particularly as a blogger, paying attention to the way my mother uses recipes has helped me improve my own.

Over the years, I’ve learned on my own what a good bread dough feels like–soft, supple, almost fleshy–and how to know when it’s risen enough. But every loaf I’ve baked comes back to that push right, pull left that Mom taught me years ago. Knowing how to knead has grounded me, in a way. So when I went over to my parents’ house the other week to bake with my mother and sister, there was no question I was going to make bread. This was a gorgeous, airy loaf, with a thin crackling crust and a delicately spongy interior–perfect for sopping up soup. I kneaded the dough while Mom watched, and then she helped me braid the dough and sprinkle it with seeds. We bickered over how long to let it rest–it turns out she was right. After all these years, I’m still learning. 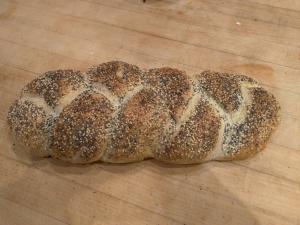 END_OF_DOCUMENT_TOKEN_TO_BE_REPLACED

From leftovers to lunch

Okay, I’ve tried to find some unifying theme for this post.  I’ve been typing and then deleting cute, smart-alecky intros for the past twenty minutes.  But you know what?  Here’s the upshot:

I made kimchi fried rice.  And it’s freaking delicious. 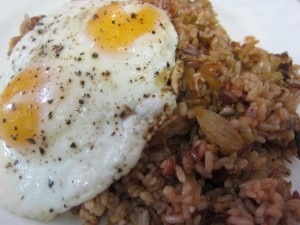 END_OF_DOCUMENT_TOKEN_TO_BE_REPLACED

So I don’t care about football. At all. I’ve been known to refer to a certain Sunday as “the Stupid Bowl.” The Puppy Bowl, on the other hand, is a delight in the wasteland of cable TV. My friends say that fuzzy baby animals are my kryptonite, and I can’t really argue. I have a tendency to dissolve into uncontrollable gibberish. It’s pretty disgusting.

The chicken wings I made for yesterday’s Super/Stupid/Puppy Bowl party, however? Not disgusting at all. (See what I did there?) 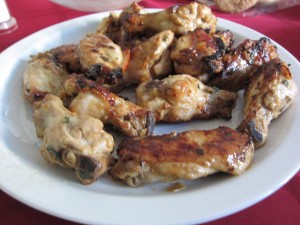