Pasta with mizithra and garlic

This is the story of the oddest pasta dish I’ve ever made.

Over the summer, Sam and I took a trip up to Portland and Seattle. While we were in Seattle, we went out to dinner with some friends at a Greek restaurant in the Ballard neighborhood, called Plaka Estiatorio. It was a stunning meal–perfectly plump dolmas, crisp and sprightly Greek salad, crunchy fried smelts with their fishy little heads still on, fat orange mussels as big as my thumb. But the dish that really blew us all away was something the menu called Yannis Makaronia.

It arrived piled high in a bowl, with little fuss and less explanation: a tangled mass of spaghetti, each strand lightly coated with crisp brown flecks. The flavors were quite subtle–it was as if the pasta itself were somehow caramelized–but whatever was clinging to the pasta gave it texture, a kind of prickly resistance that felt wonderful on the tongue. It was, as Sam said, “dusted” instead of sauced. We ate and ate until the bowl was empty, and then chattered at each other, trying to figure out exactly we’d just eaten.

As we finished eating, the owner–a twinkly-eyed, gray-haired fellow named Yannis–came over to our table. He sat with us, told jokes, explained where the ingredients in our meal had come from, gave us straws and passed around the mussel bowl so we could drink the aromatic broth. Finally one of us–I think it was our friend Hilary–got up the nerve to ask just what was in that extraordinary pasta. He grinned proudly, sat down, and told us a story.

He’d first eaten this pasta, he told us, at a restaurant in Athens. He was so impressed that he walked straight into the kitchen and persuaded the chef to show him how to make it. Once he returned to Seattle, he began making it for himself, for lunch, to eat while he was working. One day he brought his lunch out into the dining area and sat down at the bar to eat. A customer asked him about it, and then another, and then another, and before long he was offering tastes to all and sundry. It was a huge hit, and that day he added it to the menu as a special. He had no idea what to call it, so he immodestly named it after himself: Yannis Makaronia. Before long, it became so popular that he promoted it to the regular dinner menu.

Wow, we said. That’s amazing. But how on earth do you make it? He sighed indulgently, leaned forward in his chair as if preparing to give a lesson, and explained:

“You take olive oil, extra virgin olive oil, and burn it. Then you take mizithra–you know mizithra? It is a cheese, a Greek cheese. You take it, and you grate it very small. You put that in the pan, with garlic, and you cook it until it turns brown. Then you mix with pasta. That’s it.”

We hung on his every word. Somewhere in that beautifully odd description was the secret to Yannis Makaronia. It seemed to violate every basic cooking principle I knew–burn olive oil? brown garlic? cook grated cheese directly in a hot pan?–and yet he explained it so matter-of-factly, as if it were the simplest thing in the world. I had no idea how I might replicate his signature dish at home, but I suspected that it all hinged on the cheese: mizithra. And, as it turns out, I was right. 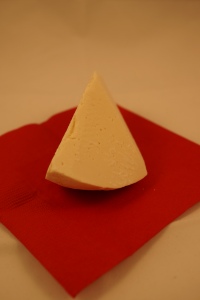 As soon as I got home, I started researching. Mizithra (sometimes spelled myzithra) is an unpasteurized goat or sheep cheese. It’s made from whey and then aged with salt, becoming hard, white, and nearly as solid as styrofoam. The flavor is very similar to feta, sharp and salty and animal-funky. And mizithra also shares another quality with feta, a quality that makes Yannis Makaronia possible: it doesn’t melt. It browns. It caramelizes.

After a little searching, I found mizithra at Whole Foods, and also at a local specialty cheese shop. I brought home a hunk of cheese, and set about making the pasta just the way Yannis explained. I minced the garlic and grated the cheese, boiled water and cooked the spaghetti. I heated the oil just until the faintest plumes of smoke came off the surface, then dumped in the garlic and cheese and stirred like crazy. It felt so wrong. So weird. So completely counterintuitive. But it worked. It browned like he said it would. It coated the pasta like he said it would. The whole thing came together in less time than it took to grate the cheese. Doggone it, it worked.

In fact, that first time, I was too timid. I didn’t scorch the cheese enough, and the flavor was anemic. The next time I tried it, I made sure to cook the cheese to an even caramel-brown before adding the spaghetti. In less than 15 minutes, I had a bowl of glistening dark-flecked pasta, eerily reminiscent of the one we demolished in Seattle.

Sam says he could eat nothing but this pasta, all day long. I actually like it better as a side dish, served with an assortment of brightly-flavored Greek dishes, the way we ate it in Seattle. And here’s another unexpected and un-pasta-like thing about it: it tastes better at room temperature than it does warm. Every time I make it, I taste it straight from the pan, and am underwhelmed; but after 5 or 10 minutes on a plate, it’s difficult to stop eating it.

So if you’re in Seattle, go visit Yannis and eat his Makaronia. If you’re not, get some mizithra and make it at home. Either way, you’ll never look at a bag of spaghetti the same way again. 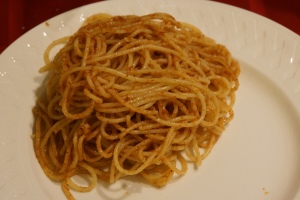