My boyfriend doesn’t like bivalves. Clams, mussels, oysters–he thinks they’re strange and unpleasant to eat. When we order paella at a restaurant, he carefully picks out every nugget of meat and places them all on my plate. He’s suspicious of cioppino, and bouillabaisse, and pretty much everything else that’s served with a cluster of shells poking out. And he has never in his life eaten clam chowder.

I, on the other hand, have been known to eat a pot of steamed clams for dinner and then drink the leftover liquid with a straw. (Don’t judge–you know you’ve always wanted to.) So this aversion of his is perplexing to me. But I love him, so I’m willing to play along. Which means getting creative sometimes. Like the day I started craving a good seafood chowder, and decided to make it with something he’d be happy to eat.

I love a good New England clam chowder as much as the next guy–creamy and gloopy and salty and rich, studded with potatoes and chewy nuggets of clam. But I was home, cooking for me and mine, and a whole lot of cream and starch didn’t sound fun. So I went with a Manhattan-style chowder, tomato-based and chunky with vegetables. And, inspired by a recipe in the Grey Lady herself, I decided to go full-on New York and flavor the chowder with lox instead of clams.

Once that happened, a whole cascade of tweaks presented themselves: red onion, dill, a scattering of capers and a little spike of horseradish. As it turns out, smoked salmon isn’t a perfect substitute for clams in a chowder, but it’s flavorful and fun in its own right. Exposed to a brief simmer, the fish turns firm and flaky, and the caper-horseradish spike at the end helps boost the flavor of the soup beyond the usual tomato-herb thing.

Because this is San Francisco, and bread bowls are our birthright, I hollowed out a couple little sourdough loaves and spooned the soup into the hollows. We gobbled every last morsel of chowder with our spoons, then tore the crispy-soggy bowls apart with our hands. There’s really nothing better than that. 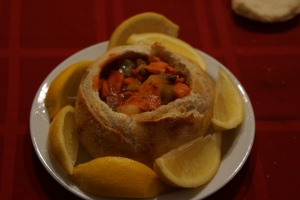