Anyone who’s spent any length of time with me–say, more than 10 minutes–knows that I am a huge fan of Zoolander. It’s one of my five desert island movies, hands down. When it first came out, I avoided it, since Ben Stiller and Will Ferrell usually grate on me like crazy, and I’m usually too buttoned-up and serious for movies this goofy. But then I caved in and watched it, and fell under its spell. It’s a dumb movie written by smart people. It’s silly, but sharp underneath.

And it’s insanely, obnoxiously quotable. My parents, siblings, and I will throw around Zoolander quotes at the least possible provocation. Whenever we’re indignant about something, it’s always, “What is this?!? A center for ANTS?!?” If someone coughs, even once, for any reason, you better bet someone will pipe up, “I think I’m getting the black lung.” And, of course, there’s never a bad time for “Orange mocha frappuccinos!!!”

So when my friend Lucia decided to put together a Zoolander-themed party, there was no question that orange mocha frappuccinos would be on the menu. But, surprisingly, when I started poking Google for ideas, there weren’t many recipes to choose from. A lot of folks seem to have done orange mocha flavored things–cupcakes, mousse, actual mocha drinks–but not frappuccinos. With any normal recipe, I would take that as a hint that it was perhaps not the best idea. But I was determined. We needed orange mocha frappuccinos, or the party would be ruined. So I decided to doctor a more traditional frappuccino knockoff recipe with some orange syrup and homemade chocolate syrup, and see what happened.

So did it work? Well…yes, and no. Honestly, there’s a reason you don’t often see coffee and orange paired together–it just tastes funny. Coffee and chocolate are wonderful, and chocolate and orange are wonderful, but all three mashed together make a bit of a flavor muddle. (Things improved marginally with a couple shots of vodka added to the blender, though that may have been the vodka talking.) That said, as a party drink to suit a theme, this more than fit the bill. It was totally drinkable, and awfully fun. I’d recommend it to anyone who needs a sugary, spikeable beverage to take to a gasoline fight. 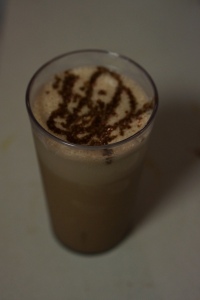