Normally when I get home, when I have some flavorful kitchen experiment in my recent past, it’s all I can do to keep my fingers from dancing over the keys to tell the blog world about it. But over the past couple of weeks, I’ve noticed myself using more and more of my words during the workday, on projects and in messages, and I seem to be running out of extras to lay down here. It’s as if I have a finite well of language, and most days I’ve pumped it dry by the time I shut my apartment door behind me.

I don’t like it. It makes me feel older, somehow, more subdued and sedate, knowing that I don’t have words upon words bubbling behind my forehead. And it does a disservice to this blog, my one consistent place to spill creative thoughts. I’ve been wanting to write for the better part of two weeks about the Spanish squash-and-vegetable soup I made, to soothe myself after another stressful workday, but instead it’s sat in my brain and its weight has made me feel guilty. So here it is, creativity be damned.

Olla gitana–literally, “gypsy pot” in Spanish–is one of those things I would never have known about, had it not been for the internet rambling I’ve been doing to distract myself from my empty well. Near as I can tell, this recipe comes from the Murcia region of Spain, where it’s said to have arisen among the Iberian offshoots of the Romani people. In reality, I think it’s a spun fantasy of what those people might eat, with extravagant Spanish inflections–saffron, mint, almonds, garlic. It tastes like a familiar, homey vegetable soup, but with a shiver of unfamiliarity from the saffron and the rich browned garlic and a chopped-up pear, which turns musky and darkly sweet in the broth. I quite liked it; it gave me comfort and a little bit of satisfaction, making something just this side of ordinary on a weeknight at home.

I’m still not sure I have all the words to do it justice right now. But at least it’s a start.

END_OF_DOCUMENT_TOKEN_TO_BE_REPLACED

Good things really do come to those who wait.

About three weeks ago, I had the flu. By about the third day, I was going out of my mind with boredom. I wasn’t yet well enough to leave my apartment, but I had to do something productive. I had canned chickpeas and tomatoes in the pantry, a jalapeno and an onion growing elderly in my fridge. So I found a recipe for chana punjabi–Indian chickpea and tomato stew–and set about making it.

I tasted as it was cooking, and it was…fine. Spicy. Indian. Warm. Generic. I was underwhelmed, and the flu had sapped me of my appetite anyway. So into the freezer it went, to wait patiently until I was well. Now I’m finally well–and very happy. After three weeks of sitting and flavor-melding, this chana punjabi is a flavor juggernaut.

I’m sitting and eating it now, as I type. It gets better with every spoonful. The chickpeas are nutty and tender, bound lightly in an velvety orange-red sauce of tomatoes, onions and aromatics. Unlike chana masala, which is turmeric-heavy and speckled with chunky vegetables, this is rich and smooth and surprisingly subtle. I can only imagine how much more stunning it would be with home-cooked chickpeas.

I will definitely be making this again. And absolutely letting it sit for a while before touching it. It’s worth the wait, believe me. 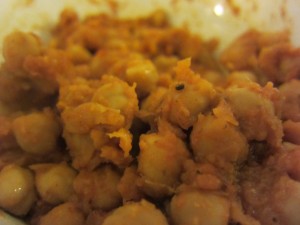 END_OF_DOCUMENT_TOKEN_TO_BE_REPLACED

I first discovered crispy chickpeas at a holiday party this past December, and I’ve become just the eensiest bit obsessed with them.  When chickpeas are roasted at high temperatures, they turn deep golden and so crisp they shatter between your teeth.  They’re lighter than chips, yet meatier and more satisfying.  And they’re fiendishly addictive, especially when tossed with a blend of smoky spices and eaten out of hand in front of the TV. 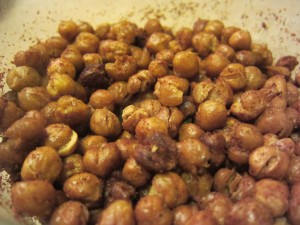 END_OF_DOCUMENT_TOKEN_TO_BE_REPLACED

Passover 2011–the side dish

My father grew up in a kosher household in Brooklyn. When he was 16, he went to a Yankees game during Passover. Without thinking about it, he got a hot dog. You know, like you do. Then, halfway through the wiener, he realized his error. A hot dog! On a bun! During Passover!

He stopped and considered. The sun was shining. The Yanks were winning. God hadn’t sent down a thunderbolt and incinerated him right there in his bleacher seat. So he said what the hell, finished the hot dog, and never kept kosher again.

In this, as in so many other things, I am my father’s daughter. Judaism, for me, is rather like the Pirates’ Code. I’ve never kept kosher in my life, and certainly never for Passover. So it’s no surprise that I only thought I was being clever when I came up with a recipe using a non-wheat flour for my family’s early seder this weekend. But, as it turns out, I used chickpeas. And chickpeas are not kosher for Passover, at least if you’re Ashkenazi. Whoops.

But I still served my dish, and it was delicious. So…there.