Years ago, I won a copy of Root-to-Stalk Cooking in an online raffle. As soon as it arrived in the mail, I plonked down on the couch with a pile of Post-It notes and bookmarked every recipe I was dying to try. Then I tucked the book away on my shelf of cookbooks and promptly forgot it existed. A couple weeks ago I pulled it down, pages still studded with little pink flags. This is the first of those recipes I’ve tried, and it’s good. Really good.

The secret here is chard stems–those beautiful, vivaciously-colored stalks that you should never, ever throw away. I love them pickled; I love them in soups and stews. And, if you blanch them until soft and tender, they make a fabulous hummus-like dip.

Yes, I said hummus. Turns out, cooked chard stems make an admirable–dare I say superior?–replacement for the ubiquitous chickpea. They blend up even smoother and softer than canned chickpeas, with no fibrous skins to get in the way. And their subtle beet-y sweetness is a perfect balance for the usual hummus suspects: nutty-bitter tahini, tangy lemon, and buttery olive oil. It’s delicious, thrifty as hell, and a great low-FODMAP alternative to traditional hummus.

One thing I didn’t expect: if you make this dip with red chard stalks, it turns out pink. Like, tutu pink. Millennial pink. I found this delightful, but it did lead to several party guests asking why there was a bowl of strawberry yogurt next to the chips. Fortunately, chard comes in a wonderful variety of colors. If you prefer a more neutral-colored dip, choose white chard stems, or a mix of white, yellow, and green. (I’d avoid full-on rainbow chard, which seems like it would turn an unappetizing shade of brown.) 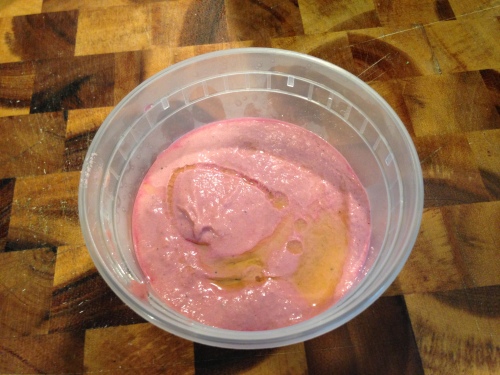 END_OF_DOCUMENT_TOKEN_TO_BE_REPLACED

Most of the recipes I post on this blog are one-offs. They’re things I dream up, cook, photograph, eat, enjoy, and then never make again. But every so often a new recipe is so simple, so tasty, and so adaptable that it wriggles its way into my regular rotation and lives there for months before it ends up here. This is one of those.

I got the idea for these stuffed sweet potatoes from a brilliant recipe over at The Kitchn. The basic premise is this: you scrub and roast a few sweet potatoes until they’re squishy all the way through. (Use small sweet potatoes, since they’ll cook more quickly and give a better flesh-to-filling ratio.) Sweat an onion, garlic, and a few flavorings in oil, then add a bunch of chopped greens and a splash of some flavorful liquid. Let the greens wilt for a few minutes, then stir in a drained can of beans and warm the whole thing through. Cut a slit in each sweet potato, drizzle the flesh with oil or butter, and pile it high with the filling. Grab a fork and a steak knife, and devour, skin and all.

That’s the outline, and I’ve had a lot of fun filling it in. Sweet potatoes need strong flavors to cut through their baby-food sweetness, and the best fillings I tried are tangy, smoky, and spicy all at once. The original recipe used white beans, shallot, rosemary, fresh lemon, and chile flakes. I’ve also done a Spanish-inspired version, with chickpeas, sweet onion, smoked paprika, and preserved lemon. But this version is my favorite so far: black beans, red onion, chipotle, and lime. Based on a few rounds of trial and error, I recommend using a bit more chipotle than you might otherwise like; even if the filling is searingly spicy when you taste it from the pan, the sweet potato will tromp all over it. Be brave.

One other great thing about this recipe: it’s made to be made ahead. You can freeze the filling in portions, and bake the sweet potatoes a few days in advance; just reheat as many portions as you need in the microwave. During the last couple months of 2014, when I was commuting two hours each way to work, I’d come home and throw together a potato as a late dinner. Since New Year’s, I’ve been working from home, and eating these as a hearty desk lunch. And if I ever burn out on this flavor combination, I’ll just start experimenting with others. 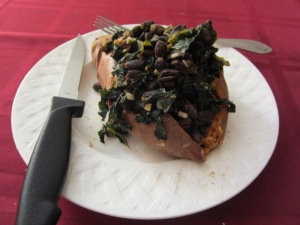 END_OF_DOCUMENT_TOKEN_TO_BE_REPLACED

When life hands you lemons, make preserved lemons. And then put some in this stew.

This came about as a happy accident. I found a very old bag of cranberry beans in my cupboard, and was feeling in the mood for a one-pot meal. I had my trusty jar of preserved lemons, and a strong craving for something with greens. We’d gone to a local meat market and deli earlier in the day for lunch, and they had a terrific price on chicken legs. And so dinner took shape: a bubbling braise of beans, chicken, and chard, flavored like a classic north African tagine.

The result was a little more brothy than a tagine, and so I’m calling it a stew. But whatever you call it, it’s a wonderful winter meal: warm and soothing, rich with spices and starch. The preserved lemon adds a pop of brightness and a salty depth, and the beans thickened the broth to a lightly saucy consistency. As Audrey said, it felt like the perfect meal to eat if you were feeling under the weather; it tasted like it could cure a lot of ills.

Another reason I love this meal is because it uses meat as a flavoring, rather than the main attraction. For six people, I could have easily bought three pounds of meat; but I decided to go with just a pound of bone-in, skin-on legs, and stretch them a bit. I browned the pieces in oil, then simmered them in the pot along with the beans; then, when the flesh was lush and tender, I pulled the chicken from the pan and shredded the meat to be stirred in at the end. The bones and browned skin contributed flavor to the braising liquid, as if it were a stock; the meat provided little pockets of chew in between the creamy beans and slippery greens.

I said this was a one-pot meal, and it easily could be. But there’s a fair amount of rich liquid involved, and for my money you really need something to soak it up. I made a quick whole-wheat flatbread to dunk in the bowls, which was a real treat. But I could also imagine putting a heap of warm couscous in the bottom of each bowl and ladling the stew over that. Either way, you’ll be looking at dreamy faces and full bellies by the time this meal’s over. 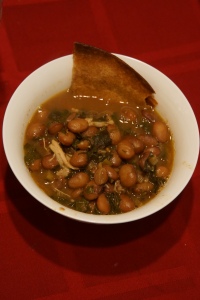 END_OF_DOCUMENT_TOKEN_TO_BE_REPLACED

I’ve always thought of chard as a winter food, but that’s not strictly true. Even now, in the sticky heat of July, chard is everywhere at the farmer’s market, all vibrantly colored and adorably bunched. So I decided to play around with chard as a summer vegetable, and stumbled on a couple surprisingly grill-friendly side dishes. With Fourth of July coming around the bend, these would definitely be welcome at any barbecue.

First, a salad. I stole this idea from my friend Isabel, who uses mashed avocado and lemon juice as a dressing for thinly sliced kale. I’m not a huge fan of raw kale, but wondered whether something similar might work with chard instead. The answer is a resounding yes: the buttery avocado smooths the bitterness of the raw greens, mellowing them into something soft and juicy and oddly addictive. Add a few flecks of sweet shallot and a little spicy raw garlic, and you’ve got a killer salad. It’s like a fresher, lighter version of the braised collard greens that so often sit alongside good Southern barbecue. In fact, Sam and I agreed that this would be fantastic as a side to a hunk of grilled meat.

This is a little more involved than your average salad, because it involves massaging the greens. I’d never done this before, and I’ll grant you, it feels a little odd: you coat the chopped greens with a glug of oil, and then knead them aggressively with your hands until they start to break down and soften. It really is like massaging, in a way–imagine you’re giving someone a deep-tissue shoulder rub, but that someone happens to be a bowl of greens. After a few minutes of kneading, the greens turn slippery and soft, and lose a lot of their initial bitterness. They start to taste like salad greens, juicy and dark and just a touch bitter. It seems like a fussy step, but it really does make the difference between inedible health-food salad and creamy, delicious summer-in-a-bowl salad.

Oh, and if you don’t want to use chard, kale would of course work here–as would collard greens, for that matter. 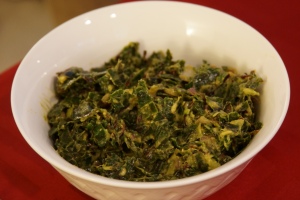 Once the salad was consumed, I had a handful of bright red stems left over. I’m a sucker for using the whole chard, and I’ve been craving pickles something fierce. So the stems got thinly sliced into matchsticks, then tossed with a bunch of similarly-cut scallions. I decided to flavor this batch of pickles with garlic, thyme, tarragon, and bay, so those went into the bottom of a jar. Then I packed the jar with stems and scallions, poured over a simple brine, and popped on a lid. In a couple of hours, I had some seriously addictive fridge pickles.

These are a little unusual-tasting, but they’re terrific. The chard stems are fibrous and crisp, like celery, with a faint beetlike sweetness that plays perfectly with the puckery brine. The scallions lose their harshness but keep their quiet oniony essence. The herbs are subtle but pervasive, so that every bite is infused with woodsy flavor. I could easily imagine these scattered over a hot dog or sausage, or even as an accompaniment to a big greasy cheeseburger.

The one slight bummer is that the pickles don’t stay pretty for long; over the course of a few days, the chard slowly gives up most of its color to the brine. For red chard, that means you’ll end up with pale pink pickles in a red brine. They’ll still taste great, though.

END_OF_DOCUMENT_TOKEN_TO_BE_REPLACED

Let’s face it: cooking is work. It means picking ingredients, figuring out how to put them together in ways that taste good, keeping everything as warm or cool as it needs to be, and then washing up the mess you’ve just made. If you’re a working stiff, and you’re coming home exhausted, that’s sometimes the last thing you want to do.

When I went to my parents’ house on a recent Monday to do laundry (shut up, I’m totally a grown-up), my mom was in just such a state. She’s a self-employed consultant, working insane hours, and on that particular day she was having technology issues that had her nearly yanking her hair straight from her scalp. She was even more exhausted than I was after a full workday. But, of course, in long-ingrained Mom mode, she dragged herself to the kitchen to look for dinner ingredients. So I stepped in.