It’s been a long winter, but finally spring seems to have taken over. The air is warming up as the thick April rainclouds descend, and Easter candy is on sale at the drugstore. As we say goodbye to the cold, here’s one more thick-and-hearty soup to give it a proper farewell.

I was initially going to use a long-bookmarked recipe for Cuban black bean soup as an excuse to (finally) inaugurate the slow cooker I bought last year. But when I eventually got around to taking it out of the box, I discovered that there wasn’t enough counter space for it in my small kitchen, and no unoccupied outlet near enough to plug it in. So my little slow-cooker is sitting, unloved, in a corner until I figure out what to do with it. (It doesn’t help that I’m actually a bit scared of slow-cookery, having never done it in my life. But that’s a story for another day.)

So I made this soup the old-fashioned way, burbling and steaming in a pot on a back burner while I lounged on the couch with my laptop and a mug of tea. It took less time than I expected for the beans to turn from hard and bouncy to soft and spoon-mashable, and then to start rupturing and giving up their muddy starchiness to the soup. In about three hours, what began as a mess of beans and vegetables turned into a creamy black pool studded with red and green bell pepper skins. The real surprise, though, is an enormous splash of vinegar stirred in right at the end; it seems like a lot, but rather than make the soup brassy and acidic, the vinegar somehow intensifies the sweetness of the beans and the peppers. Add a swirl of sour cream (or, in my case, full-fat Greek yogurt) and a torn handful of cilantro, and presto: a smoky-starchy comfort food meal in a bowl.

I decided to keep this one meatless, but it’s certainly not a requirement. The recipe I adapted calls for a ham hock, which would be a gorgeous and indulgent addition if you can get your hands on one. If you’re not inclined to chase down a bone, though, you could decrease the initial dose of oil to 1 tbsp and render a few chopped-up strips of bacon to cook the vegetables in.

Oh, and, of course, this is yet another recipe that benefits from a long hibernation. Make a lot, freeze a lot. Even in April, there are plenty of rainy nights that call for soup.

END_OF_DOCUMENT_TOKEN_TO_BE_REPLACED

It seems so strange to be talking about anything other than the hurricane right now. Especially when all I can think to start this post with is a gentle complaint about the weather here–namely, that it can’t make up its mind. Somehow it feels insulting, even malicious, that summer is still flirting with us here in Northern California. Granted, she seems to be losing interest, with shorter bursts of sunshine and clouds that linger longer and drop more water. But there is still an unsettled quality to the weather–not nearly as unsettled as on the other side of the country, certainly, but just enough to make me uneasy.

I’m not writing this to try and chase away the sunshine. I’ll happily take it, as long as it lasts. But as someone trying her feeble best to cook seasonally, it’s a surprising challenge to have such ping-ponging weather. I’ve had a hard time figuring out what to feed myself lately. It’s too cool for a green salad, but too warm for a big pot of stew. I’ve been craving mulled cider for weeks, but it seems plain silly to be sipping a wintry drink when the mercury is inching back towards 80 degrees. The creative challenge–one I haven’t quite been up to lately–is finding a way to straddle the divide between summer and fall.

This salad was one of my attempts. I made it for a black-and-orange potluck last weekend, where it was a respectable guest but by no means the star. I guess that’s the curse of potato salads: to be solid and dependable, a cheerful second fiddle to the sexier, meatier main courses. This particular salad made a pretty strong case for itself, though. I roasted chunks of sweet potato–skin on, for texture and ease–with olive oil and a sprinkle of smoked paprika. Then I made a tangy-spicy slip of a dressing, with lime and mustard as the standout players, and mixed in a can of black beans and a big handful of chopped parsley. The resulting combination was nice, if a little subdued: sugary sweet potato, smoky spice, guttural black beans, the faintest whisper of dressing, grassy flecks sprinkled here-and-there. It seemed very appropriate for the odd not-quite-season we’re in.

Of course, as soon as I hit “publish” on this post, the sky will cloud over and we’ll be doused. Then it’ll be on to soup and stew and rib-sticking casseroles. Honestly, when compared to what’s been going on three time zones away, I’m grateful for all the coy stages of weather we’ve had. Here’s hoping life gets back to normal soon, for all of us. 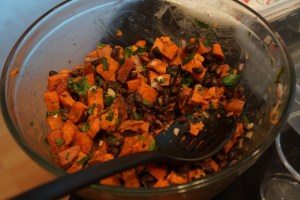