I’ll be honest. I don’t really get the whole kale thing. Yes, it’s dark and leafy and pulsing with iron. Yes, kale chips are tasty (although, so is almost anything else, if you toss with oil and salt and roast it to a crisp). But I’m really not convinced that kale is the hot, trendy, it-girl food of the moment. I’m just not a huge fan, no matter how delicately it’s sauteed or how vigorously it’s massaged.  Eating a kale salad, to me, is like chewing the rough end of a bottle brush.

Now. With all that said, I’ll be the first to admit that kale has its place in the world. Say, for example, in this soup.

Mushroom barley soup is a classic on its own–and with good reason. As in so many great Eastern European foodstuffs, the mix of hardy grain and earthy fungus is a source of comfort, a taste of home. But with a mess of kale leaves cut into ribbons and wilted into the pot, it becomes something else entirely. The broth softens the kale’s brushy edges, making it tender and supple. Suddenly, a stodgy old favorite becomes a hearty winter meal in a bowl, fortifying and warm without the attendant weight or guilt.

This is the kind of soup that demands a good gutsy broth. For the photographed batch, I raided my freezer for rich, chestnut-colored turkey stock, made from the carcass of my family’s Thanksgiving bird. If I didn’t have that, my first choice would probably be beef stock; normally I don’t go in for big cow flavor, but beef loves both mushrooms and barley so much that it seems like a natural. If you prefer a vegan soup, just swap out the stock for a strong vegetable broth–something dark and mushroomy, I would think.

Yes, kale has its place. Keep your massaged bottle-brush salads; I have my soup bowl. 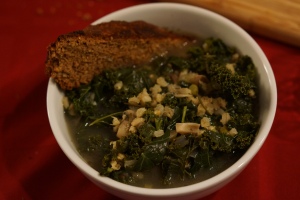