This sandwich was SO HARD to photograph. It just did not want to behave. I’ve been making a version of this sandwich once or twice a week for the past month, and they’ve all been docile and well-constructed and probably totally photogenic. Then I finally got around to charging my camera battery and made myself a sandwich specifically to photograph. This one decided to fall apart every time I put it down.

Once again, I beg you to ignore the photo. Because this right here? Is one phenomenal sandwich. I first had it at a sandwich shop near where I used to work, and fell in love. After almost a year of craving it since leaving that job, I finally managed to recreate it at home. It’s got the sunny chewiness of scrambled egg, which I like so much better than the pork you usually find in a banh mi. On top of the egg, add lots of utterly compelling things: pickled carrot and daikon, cucumber sticks, jalapeno slices, cilantro leaves, and lots of spicy mayo. It’s hot and cold, sweet and sour, crunchy and chewy, spicy and rich–everything there is to love about banh mi.

I call this a “scrambled egg” sandwich, but what really fills its belly is a simple flat omelet. At the sandwich stand, they’d steam the eggs in a special container in the microwave, creating a eggy half-moon. To replicate that effect, I beat the eggs and add them to a lightly oiled skillet over medium-low heat. Then I let them cook, completely undisturbed, until they’ve set into a springy, slightly puffed disc. (This usually takes about 15 minutes on my stove, which leaves plenty of time to leisurely prep the other sandwich ingredients.) Slide the disc out of the skillet, cut it in half, et voila–two eggy half-moons, ready to slide between halves of bread.

So much for the egg. There’s one other bit of advance prep needed for this sandwich: pickling some carrots and daikon. I made up a quart of refrigerator pickles, following a recipe from the New York Times, and have it handy in the fridge for whenever the banh mi craving strikes. You could also make a batch of fifteen-minute quick pickles, which will be ready in about the time it takes the eggs to cook. Either way, you’ve got the makings of one satisfying lunch. 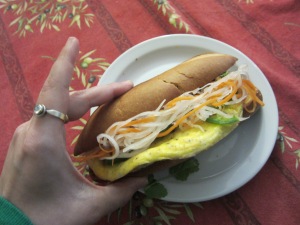