The summer I spent in Nicaragua as a teenager, working on a volunteer project, I spent a lot of time in people’s kitchens. I’d only recently been bitten by the cooking bug, and it seemed somehow that every woman in the community I was living in was an excellent cook. (With the exception of my host father–a former restaurant chef–every cook I met was female.) I spent a lot of time peering over the shoulders of these brisk, sandal-clad women, watching as they prepared the afternoon and evening meals. I learned how to fry plantains, how to mix rice and beans in just the right proportions to make gallo pinto, how to shred cabbage for a vinegary slaw that we ate on top of fat masa cakes. But the thing that surprised me the most was how the Nicas made guacamole.

I only had it once, in the home of a woman I didn’t know very well. She’d just finished showing my volunteer partner and me how to form tortillas by hand–a skill I’ve sadly since forgotten–and told us she would make us some guacamole to have with our lunch. There were avocado trees everywhere in town, and we ate enormous ripe avocados every day with a spoon and a sprinkle of salt, but no one had ever offered to make us guacamole before. After a few minutes of slicing and chopping, she presented us with a bowl: in it was a chunky mix of avocado cubes, onion slices, and smooth rounds of hard-boiled egg. “Es el guacamole Nica,” she said. It was absolutely unlike any guacamole I’d ever had, and the flavors wrestled around strangely in my mouth. I felt very far from home. I finished my portion, thanked her profusely, and then for the rest of the summer we ate half-avocados with salt. 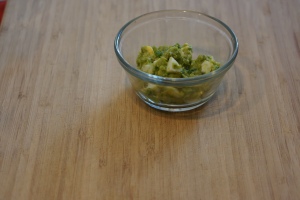 I hadn’t thought about that guacamole until last weekend, when avocados showed up at the farmer’s market. I went shopping with my friend Molly, and she was craving guacamole. We agreed that it might be fun to try recreating that strange and startling guacamole I’d had over a decade ago. All we needed was an onion, an avocado, a few eggs, and some limes. I wasn’t expecting much–it seemed way too simple to be exciting. But when I took a bite, the memory hit me square between the eyes. Suddenly I was back in that Nica kitchen, shy and out of my element, taking the spoonful offered to me.

And something else happened, too. Suddenly, tasting with a teenager’s emotions and an adult’s palate, I realized just how delicious Nicaraguan guacamole is. The flavor is clean and sharp, with a bit of welcome chewiness from the egg and a prick of pungent sweetness from the onion. This will absolutely be my go-to guacamole recipe from now on–it’s that good.

The traditional recipe is dead simple: avocado, onion, hard-boiled egg, lime, and salt. I added some scallion tops and cilantro, just because we had them around, but these are neither traditional nor necessary, and the guacamole is great without them. You can mash the avocado to whatever texture you like, but for a real authentic guacamole, keep it chunky, almost like a salad. That way, the squishy avocado, chewy egg, and crunchy onion each have their say. 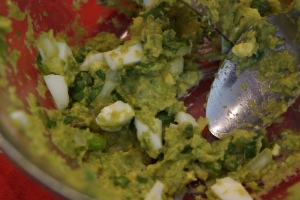 Place the eggs in a medium saucepan and add enough cold water to cover by about an inch. Cover the pan and bring to a rolling boil over medium-high heat. Turn off the heat and let the pan stand, covered, for 10 minutes. Drain the eggs and immediately run them under cold water until they’re cool enough to handle. Peel, dice, and set aside.

In a medium mixing bowl, combine avocado, lime juice, and salt, and toss to combine. Add diced egg, onion, scallions (if using), and cilantro (if using). Mix to combine, then taste and add lime or salt as needed. Serve immediately.