I’ve been making a version of this frittata for years. And thanks to my friend Elly, I think I’ve finally hacked the technique.

It’s not a secret, certainly, that eggs + potatoes + peppers + sausage = phenomenal breakfast. Combine them in a frittata–a sort of chubby omelet or crustless quiche–and you get something deeply comforting and filling for fairly little effort. A frittata can be eaten warm or at room temperature, on a plate or on the go, for any meal of the day. I’ve done the potato-pepper-sausage thing more times than I can count, and it’s still my favorite frittata filling.

That said, I’ve had a dicey relationship with frittata for a while. The usual method I used is to cook the filling on the stove, then mix in the eggs and scramble them until they just start to set, then finish the whole thing under the broiler. It makes for a very pretty final product–golden brown on top, solidly firm all the way through–but I just didn’t like the texture. My frittatas always ended up grainy and tough, and the browned top tasted more bitter than delicious. For a long while I stopped making frittatas, because I was tired of laboring over delicious fillings only to wind up choking down a mass of crumbly egg.

Enter Elly and her genius technique. Instead of starting the eggs in a hot pan and finishing them under the broiler, she suggested cooking them all the way through in a moderate-hot oven. We went to the farmer’s market for ingredients: firm Spanish chorizo, golden potatoes, curly frying peppers, scallions. I started out the usual way, sauteing everything in an oven-safe skillet on the stove. Then, after sliding the pan off the heat and letting the filling cool for a second, Elly added the eggs and we slid the whole assembly into a 400-degree oven to bake. 15 minutes later, I pulled out a gorgeous golden egg-cake, puffed and set but not at all browned. It was tender and smooth all the way through, and the eggs had gently absorbed the flavors of pepper and potato and onion. That frittata got eaten so fast, I didn’t even have time to photograph the wedges on a plate. With a tangy spinach salad, it made for a glorious Sunday lunch.

One note: in order to really pull this off well, your skillet must be both oven-safe and nonstick. I used a stainless steel skillet, and while the frittata did come out with some effort, it left behind a heckuva mess. If you don’t have an appropriate skillet, I’d suggest sauteing the filling first, then finishing the frittata in a generously greased or parchment-lined 9×13 baking dish. The cooking time may be slightly different this way, so keep an eye on it. 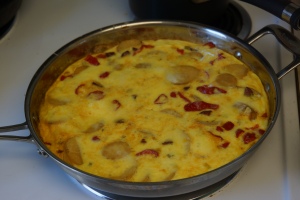 Kernels from 1 ear of corn (optional)

Preheat oven to 400º F, and place a rack in the middle position. In a large mixing bowl, beat together eggs and cheese. Set aside.

In a large oven-safe nonstick skillet, heat oil over medium heat. Add chorizo and potatoes and cook, stirring frequently, for 12-15 minutes, or until the potatoes are starting to get tender and the chorizo is crisp. Add scallions, peppers, and corn kernels (if using), and saute for another 2-3 minutes, or until the scallions are soft and the peppers are crisp-tender.

Remove the pan from the heat and wait for the sizzling to subside. Pour in the beaten egg mixture. Gently mix to incorporate the filling into the eggs and evenly distribute everything in the pan. Sprinkle the cheese over the top. Transfer the skillet to the oven and bake for 15 minutes, or until the frittata is puffed and set but still tender all the way through.

Remove from the oven and transfer the frittata to a cutting board. Cut into wedges, season with salt and pepper, and serve warm or at room temperature. Leftovers will keep in an airtight container in the fridge for up to 3 days.