It’s not often that I’m led astray by a recipe. This one was delicious, but misleading as all get-out.

The idea was so neat: for the vanilla-loving boyfriend’s birthday, make him a white version of a chocolate lava cake. The New York Times even had a recipe waiting to be tried–the accompanying article promised “a puddinglike center, weeping white chocolate.” But somewhere along the line, something went cattywompus.

The cake was delicious, all right–wobbling and bourbon-fragrant and almost flan-like in the middle–but it took weird turns at several points down the line. The batter was stretchy–like, bread dough stretchy–and there was way more than would yield the 10 mini-cakes the recipe said I would get. I fit it all into 12 cups in a muffin tin, but just barely, and even then they puffed unattractively over the edge. I suspect the intended effect was for the center to be more goo than flan, but I didn’t end up getting there, and for once I don’t think my incompetence was to blame.

I think I’ve figured out part of what went wrong: the batter was chilled too long, the recipe lied about the number of servings it made, and the baking time overshot the gushy-center sweet spot. I’ve tried to remedy some of this in the written recipe below. Whatever the case, these cakes are tasty: sweet and soft and unmistakably vanilla. Just don’t expect a lava cake, because this (sadly) isn’t one. 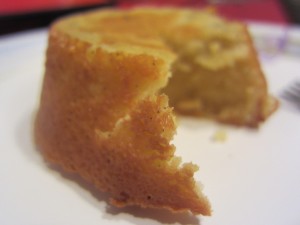 END_OF_DOCUMENT_TOKEN_TO_BE_REPLACED

Here’s a little treat I’ve been sitting on for a while: instant chai latte mix.

This makes an incredibly fragrant cup of tea, particularly if you grind the spices yourself. Put in cute glass jars, it makes a terrific gift–the first batch I ever made was a treat for my tea-loving neighbors after they brought their new baby home.

To make a traditional cup of chai, brew a cup of strong black tea, like Assam, and stir in 2 tsp of this concentrate, plus whatever sweetener you like.  But that’s far from the limit–I could see this working beautifully with green tea, chamomile or mint tea, hot chocolate or coffee.  It can be used with iced tea as well as hot.  And for a real treat, stir a tablespoonful or two into a bowl of oatmeal and top with a drizzle of honey. 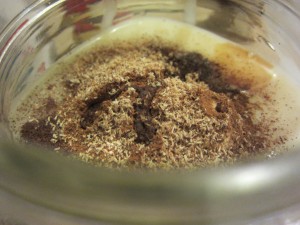 END_OF_DOCUMENT_TOKEN_TO_BE_REPLACED

So of course, I sit down to write a post about writing, and I have writer’s block.  Of course.

It’s the perfectionism-goblin that does it.  He’s taken up residence on my shoulder lately, and he’s started clearing his throat more and louder over the past couple of weeks.  Every time I put fingers to my keyboard, he hops down and starts stroking them, and suddenly I can’t write anymore.

Sometimes it makes me wonder why I keep at it, this writing business.  It’s simultaneously the most painful and the most necessary thing I ever do–and I do it to myself on a regular basis.  The perfectionism-goblin is persuasive and quick.  He likes to whisper in my ear me that I’m not really cut out to write my way through life.  A lot of the time, I listen to him.

But not all the time.

END_OF_DOCUMENT_TOKEN_TO_BE_REPLACED

This is kind of a half post, so I apologize in advance.

I’m headed out on a business trip tonight, and my jaunty little personal laptop is staying home this round. So there will be no blogging until I get back. There are some other reasons I’m holding off on a bigger post–I’ll elaborate the next time I show up here–but for the time being, here’s a recipe to hold you over.

I don’t have a good photo for this one, because I was using my dad’s iPhone camera and I apparently shake like a palsy patient every time I press the shutter button. But the recipe itself is worth sharing. Trout, mild and pale and buttery, gets dredged in seasoned flour and pan-fried until golden, then served with a kicky corn and pepper relish on top. Good, simple, nourishing in a slightly upscale kind of way.

And with that, it’s off to pack. 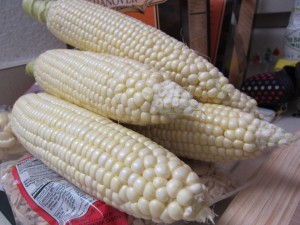 END_OF_DOCUMENT_TOKEN_TO_BE_REPLACED

I didn’t realize it was possible to be this sore after wandering in the woods for a couple hours.  Everything from my waist down hurts.  My stomach and my thighs and my bottom and my calves are whining at me every time I move.  I’m one blog post away from collapsing into bed and sleeping the deep sleep of the overexerted.  Clearly, I overestimated myself in just about every way.

Except one.  I’m not letting myself get discouraged this time. 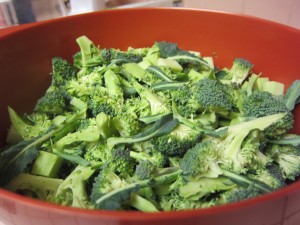 END_OF_DOCUMENT_TOKEN_TO_BE_REPLACED

A milestone, and a cake

I can’t believe I’ve already jabbered here a hundred separate times.  I feel like a real blogger now.  I’ve finally gotten my wings.  It’s strange; I’m going to have to get used to this flying thing.

When I started here a year and change ago, I wasn’t really sure what I wanted this blog to be.  I figured I’d use this as a space to let off steam, put up some photos of things I cooked, and let the rest sort itself out.  But slowly, it’s becoming clear that when I take the time to write from the heart, people listen.  I’ve now written two posts, in particular, that have struck a nerve in ways I never expected.  So many people have reached out with their responses and stories; even when I don’t agree with everyone, it amazes me that people took the time to read and respond to little old me.  I’m touched, and I’m honored, and I’m humbled. 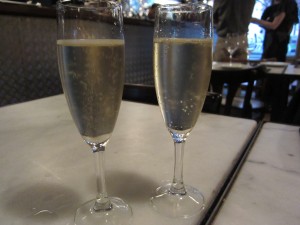 END_OF_DOCUMENT_TOKEN_TO_BE_REPLACED

You don’t know it, but you helped me today. I was at the gym–I hate the gym, Mr. Limbaugh–and I started surfing the channels on the dinky gym TV for a distraction. I landed on CNN, and watched Anderson Cooper replay the footage of you saying those words–the ones that have landed you in such trouble. And suddenly I had so much fast-moving rage coursing through my limbs that my workout was a breeze.

You said this about Georgetown Law student Sandra Fluke’s decision to testify before Congress about the need for affordable birth control:

Mr. Limbaugh, I have PCOS–the disease that helped land Sandra Fluke in your cross-hairs. During her testimony, she told the story of a friend who lost an ovary, and possibly her chance at having children, to PCOS. I have never had that experience, Mr. Limbaugh, and I am thankful every day that I have so far avoided it–because I have unfettered access to hormonal contraceptives.

END_OF_DOCUMENT_TOKEN_TO_BE_REPLACED

I wasn’t planning on showing you this one.

It started with a Sunday farmer’s market jaunt with some out-of-town friends.  Somebody suggested making pesto pasta with sausage and mushrooms for lunch.  The best bargain at the mushroom stand that day was oyster mushrooms; the most appealing option at the sausage stand was lamb.  So we bought a little of each, brought them back to a kitchen and dumped them in a frying pan.  You know, like you do.

I only took one halfway-decent photo.  That’s how unremarkable I thought this was going to be.  Boy howdy was I wrong. 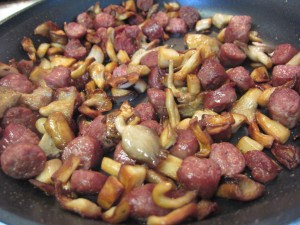