So.  Lemon curd straight from the spoon is nice.  But you know what’s even better?  Putting it in a cake.

My dear darling Audrey’s birthday was last week.  Much like Sam is a vanilla freak, Audrey is a lemon girl.  This year I decided to use her birthday as an excuse to tackle a good old-fashioned layer cake.  The recipe I ended up using intrigued me, in large part, because it includes no chemical leavening agents at all–its lift comes entirely from egg whites.  Plus, it’s an olive oil cake, which I’ve realized I prefer over butter for making citrus cakes.  The oil makes the cake fruity and moist, a perfect pairing for sparky lemon.

I was thoroughly prepared to come to my computer today and tell you a story of sticky yellow disaster.  Here’s the thing: for a two-layer cake, this recipe demands ten whole eggs, separated.  That translates to ten beaten egg whites, which translates to an enormous amount of batter.  It fit in my two cake pans–barely–but then it rose alarmingly in the oven, to the point where the cakes were domed almost as high as the pans they were in.

But the batter didn’t overflow, and the cakes eventually deflated and settled.  By the time I pulled them out of the oven, they were relaxed and fluffy, like an angel food cake with muscle; as they cooled, they shrank further, until they looked and felt like normal crumby-light cake layers.  So no disaster story today.  But if you’re using 8-inch pans, you might want to make three layers instead of two. 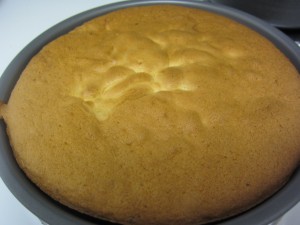 One final note about the cake: while it was glorious yellow and very tasty, the lemon flavor wasn’t as pronounced as I had hoped.  The lemon curd was definitely needed to punch up the lemon flavor.  I was quietly disappointed that I’d used up my pretty Meyer lemons for such a subdued cake; in fact, I almost wished for the pucker of normal lemons.  I also used extra virgin olive oil for the cake, which gave it a bit too much fruitiness for my taste.  Next time, I’d use cheap lemons, garden-variety olive oil, and a handful of rosemary or lavender to offset the tart curd and sweet honey frosting.

About that frosting…it’s not actually a true buttercream, but an approximation.  Where American buttercream relies on a boatload of powdered sugar for structure, this one is pretty much honey-flavored butter, whipped until it’s spreadable.  It’s goldurned delicious, but a little softer and richer than a traditional buttercream.  Don’t go waiting for this stuff to get stiff and thick, because it never will.  Also, use the best honey you can get your hands on; from experience, I recommend orange blossom honey if you can get it.  It’s the primary flavor here, so you want to make sure you like what you taste.

If you end up with a little extra frosting–which, if you fill the cake with lemon curd, you probably will–use it for decorating.  Tint it wacky colors, pipe it in crazy designs, do whatever the hell you like.  For me, little dollops with a piping bag are about the limit of my decorating abilities.  But that’s the great thing about showing up to a party with a homemade cake: people don’t care if it’s pretty.  They care that you made it, and that it’s pillowy and moist and filled with creamy lemony bliss. 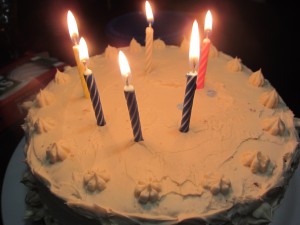 Adapted a little bit from Gourmet

*If you don’t have cake flour, use 1 3/4 cups all-purpose flour, sifted together with 1/4 cup cornstarch.

Preheat oven to 325º F and place an oven rack in the middle position.  Generously grease cake pans, and line the bottom of each pan with a circle of parchment.

In a large mixing bowl, beat together egg yolks and 1 cup sugar until pale and thickened (you can do this by hand, or with an electric mixer on medium speed).  Beat in olive oil, lemon juice and zest, and rosemary or lavender (if using).  Sift in flour and use a flexible spatula to mix gently until just combined–if there are a few streaks of flour here and there, that’s fine.

In another large (and very clean) mixing bowl, combine egg whites and salt.  Beat until foamy, then add the remaining 1/2 cup of sugar, a little at a time, beating between each addition.  Continue beating until the egg whites hold soft peaks.  Transfer one-third of the beaten egg whites into the cake batter mixture, and mix until thoroughly combined and smooth.  Gently fold in the remaining egg whites until just barely combined; as soon as the last little bit of egg white disappears, stop mixing.

Divide the batter evenly between the cake pans, and give each pan a couple firm taps on the counter so that any air bubbles in the mixture come to the top and burst.  Place each cake pan on a rimmed cookie sheet, to catch any potential spills, and bake for 40-45 minutes, or until golden brown and a toothpick inserted in the middle comes out clean.

Cool the cake layers in the pan for 10 minutes, on a rack if you have one, then turn them out of the pan and let cool completely–the sides may cave in slightly.  The cake layers may be made a day ahead, wrapped in foil and stored at room temp; or wrap them tightly in a double layer of plastic wrap and freeze for up to a month.

Adapted from Recipes to Nourish

Combine all ingredients in a large mixing bowl.  Use an electric mixer on low speed to cream the mixture until thoroughly combined, then increase the speed to medium and continue beating until the frosting is light and fluffy.  Use immediately, or cover tightly and store in the fridge for up to 3 weeks (if refrigerating, bring the frosting back to room temp before using).

To finish the cake

If your cake layers are domed on top, use a serrated knife to level them.  Place one of the cake layers upside down on your cake platter.  Spread about 1/2 cup lemon curd or buttercream evenly over the top (or, really, the bottom) of the cake layer.  Place the other cake layer on top, again upside down; if the caved-in sides make the cake uneven, cut around with a serrated knife to even everything out.  Brush away any stray crumbs from the top and sides, then spoon off about 1/2 cup of the buttercream and spread it on the cake in a very thin layer.  Put the cake in the fridge for about 15 minutes to let this “crumb coat” set, then finish icing the cake with the rest of the buttercream.  (If you used lemon curd to fill the cake, you’ll probably end up with a little extra frosting.)

If you want a video demonstration of how to frost a layer cake, the New York Times has a good one here.