Chalk up today’s post to “experiments in high-altitude cooking.”

I spent the weekend with friends at a vacation home in Mammoth Lakes, California. At nearly 8,000 feet above sea level, it’s a ski and snowboard haven. We neither skied nor snowboarded–the winter’s been so dry that the resorts are resorting (heh) to exclusively man-made snow. Plus, the only winter sport I’m really interested in is sipping wine in a hot tub.

So we mostly stayed indoors, away from the punishing bone-dry winter winds. We cooked big communal meals. I improvised a cozy broccoli soup–quite literally, out of thin air–that somehow got lots of compliments. Not bad, given that we had trouble getting water to boil hot enough to cook pasta. 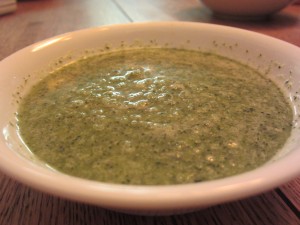 Turns out, because water boils at a lower temperature at high altitudes, it takes for-freaking-ever to cook something. Given that overcooked broccoli is a crime against humanity, I can’t usually bring myself to cook it for longer than eight minutes. Simmering that soup took a verrrrry long twelve minutes. In fact, I probably undercooked the broccoli. It pureed a little reluctantly, and got a bit watery in the bowl.

But I’ll tell you something: that damn soup tasted exactly like broccoli. Which, in my book, is a very good thing.

We had plenty of garlic lying around, so just for funsies, I made a simple garlic broth to cook the broccoli in. The flavor was subtle–very subtle–but it was hard to tell whether that was the altitude dulling the flavor, or the strength of the broth itself. In either case, I liked that the subtlety didn’t mask the flavor of the star ingredient. You could certainly use chicken or vegetable broth, if you’re not as much of a broccoli fiend as I am.

Yeah, yeah, you could add cheddar cheese. You could stir in sour cream, or creme fraiche, or yogurt. You could thicken the soup with some diced potato or parsnip or celery root. But I don’t know that all the folderol is necessary. This is pretty much pure broccoli, in soup form. No matter where in the air you’re hanging, it’s good clean dinner fun.

Adapted heavily from Recipes for Health

Combine the cut garlic, bay leaf, crushed red chili, water and salt in a pot. Bring to boil, cover, reduce heat to low and simmer for 1 hour, or until the water has turned into a garlicky broth. Strain out the solids, et voila: garlic broth. This is best right after it’s made, but it will also freeze pretty much indefinitely.

Zest of half a lemon

Trim the ends of the broccoli stems and discard. Use a paring knife to trim the tough dark green outer layer off the stems; cut florets and stems into small even-sized pieces. The smaller the pieces, the faster they’ll cook.

Bring garlic broth to a boil. Add broccoli and wine to the pot, cover and reduce heat to medium-low; simmer until the broccoli is completely tender but still bright green, 6-8 minutes. To test, pierce a stem piece with a paring knife; the blade should meet little to no resistance going in.

Transfer the soup in batches to a blender and puree. (Normally I’m a big fan of immersion blenders, but in this case the heavy machinery is definitely necessary.) Stir in lemon zest, grated garlic, and Parmesan cheese (if using). Season with salt and pepper to taste, then ladle into bowls.

Garnish with shredded cheddar cheese and plain Greek yogurt, if you must. I don’t see the need.