In case you hadn’t noticed, this is a simple dish.

It’s also, at least in my world, the classic example of a sometimes food: a little guilt-inducing, best taken in small doses. 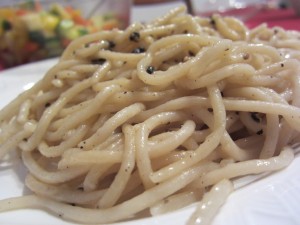 The appealing thing about cacio e pepe is that, unlike the way most Americans eat pasta, it does just as nicely as a side dish as it does as an entree.  In fact, having eaten this recently as the main thrust of a meal (don’t judge), I like it better as an accompaniment.  In small doses, the slow-blooming heat of the pepper and the lush tang of the cheese are refreshing; but it does have a way of going dull if you let it go on for a while.  There’s very little textural contrast–the sauce is gauzy-thin and laminated gently onto the surface of the noodles, and the only variation is the occasional pop of a half-ground peppercorn.

I would imagine this being a tee-riffic accompaniment to a piece of roast poultry, or even a minimalist preparation of a light-fleshed fish.  I’m also a fan of a crisp salad with a starchy pasta like this, but given the season, roasted vegetables would likely do just fine.  In any case, I like this pasta best as a dark-speckled canvas, rather than a finished work of culinary art. 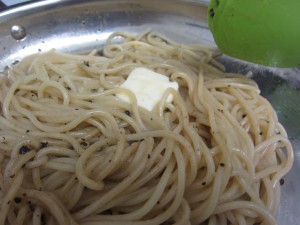 The recipe I adapted calls for two types of cheese–Grana Padano and Pecorino–both of which could easily be replaced with Parmesan.  I like using a Parmesan-style sheep cheese I get from a local farmer’s market–snooty, sure, but a real treat.  Anything you can grate into downy, snowlike strands is probably fair game.  The one thing I wouldn’t use is the pre-grated stuff in the bottle–it’ll never melt completely the way the fresh-grated stuff does, and you’ll end up with a grainy sauce.

2 tsp fresh-cracked black pepper (or more, if you’re a spice fiend like me)

Cook the pasta as per usual, in plenty of boiling salted water, until about 2 minutes shy of al dente.  Drain, reserving about 1 cup of the pasta water.

Meanwhile, heat olive oil in a heavy skillet over medium heat.  Add pepper and toast just until fragrant, about 1 minute.  Add 3/4 cup pasta water to skillet and bring to a simmer.  Add pasta and butter, and toss gently with tongs until the butter has just melted.  Reduce heat to low and add Grana Padano or Parmesan cheese, tossing gently until the cheese is thoroughly melted.  Remove from heat and add Pecorino cheese (if using); continue tossing gently until the cheese has melted and the pasta is coated with a thin, shimmering layer of sauce.  If the pasta seems dry, add a little of the remaining cooking water.

Serve the pasta warm.  If you want to be extra-decadent, give it a little snowfall of extra cheese over top.