All right.  Now that that’s out of my system, let’s talk about Chinese food.

I’m a born-and-bred American Jew.  Chinese takeout is woven into our cultural identity just as much as latkes, candles, guilt and the uncanny ability to sniff out other Jews at fifty paces.  But I’m not entirely in lockstep with my people on this one.  I’m picky about my Chinese food.

It’s either gotta be dirt-cheap from a buffet line–cloyingly sweet, glistening with oil and heavily impregnated with MSG–or expensive, meticulously authentic and preferably homemade.  The middle-of-the-road Amurrican Chinese menu, the kind you find at ninety percent of sit-down Chinese places, just doesn’t do it for me.  With one exception.

(Incidentally, Sam also likes scallion pancakes.  His obsession is a bit more tamed than mine.)

So, of course, it’s mighty convenient that scallion pancakes are hilariously easy to make at home.  They require a bare minimum of ingredients–flour and warm water to make a dough, scallions and salt for flavor, and oil for rolling and pan-frying.  They’re one of the few foods that come out of a home kitchen tasting more or less exactly the same as they do in restaurants.  It’s pretty remarkable. 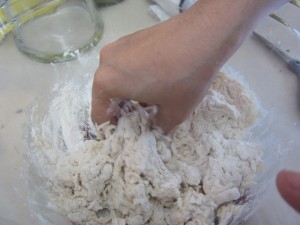 The only slightly tricksy part of the process is integrating the scallions evenly into the dough.  When I was still living with my parents, I used the method recommended by one of their cookbooks, a battered and stained little volume on Chinese vegetarian cooking, written by a British woman in the 1960’s who claimed to have spent a year living with Buddhist monks in the mountains.  She suggested rolling the dough flat, scattering scallions in the middle, then folding each of the four corners successively until the mixture formed a coherent bundle.  I was never crazy about those instructions, because they demanded rolling and folding all the dough at once, repeatedly, and the scallions always seemed to collect stubbornly in one corner or another.

Idly indulging my little obsession, I poked around on the Innernetz for other techniques.  The latest one I found, from The Kitchn, is my favorite so far.  Instead of folding the dough into one large lump, this method has you roll the dough over the scallions into a long log, then cut the log into portions and bundle them individually.  The result is portions that are much easier to flatten, as well as scallions that are more evenly and generously spread among the resulting pancakes.  Which means more sweet whispery-onion goodness in each serving.

I brushed the dough with a little sesame oil before adding the scallions, but that’s by no means a requirement.  It added a beguiling trace of nutty, restaurant-y flavor, but not enough that I’d demand it every time.  If you want to save your expensive oil for other uses, I won’t judge at all.

Oh, and just for entertainment’s sake, I will prove that scallion pancakes are just like any other pancake in one essential way: the first one always comes out looking wonky.  The last time I made these, my inaugural pancake looked like this: 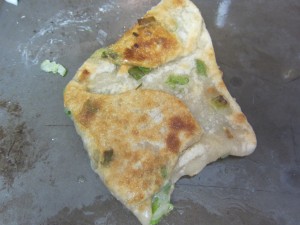 I blame the Monterey Bay Aquarium.  Sam and I went there and spent a lot of time petting bat rays in the touch pools.

But by the fourth pancake, with a rolling rhythm established and a sweet spot of temperature and oil in the skillet, things were looking up:

They were both delicious.  But then again, when it comes to scallion pancakes, I’m not real picky.

Informed by several sources, most recently The Kitchn

Combine flour and water and mix until a stretchy dough forms.  If the dough seems dry, add a bit more water; if it’s unmanageably sticky, add more flour.  Knead the dough with your hands until dough is smooth and elastic, then form into a ball.  Coat the surface of the dough-ball lightly with peanut oil, then place it back in the mixing bowl.  Cover the bowl with a damp cloth and let the dough rest at room temp for 30 minutes.

When you’re ready to roll (literally), cut the dough into 4 equal parts.  Lightly coat the back of a baking sheet with peanut oil, then place one of the dough portions in the middle and lightly oil the top of the dough as well.  This will seem like an excessive amount of oil, but trust me–if you forget to oil the top and bottom of the dough, like I did, you will end up with a gummy mess.

Roll the dough portion into a large, thin rectangle.  Brush the top with peanut or sesame oil, then sprinkle with scallion and salt.  Working from one of the long sides of the rectangle, roll the dough gently but tightly over itself, until you have a long log of dough.  Cut the log into two pieces, and coil each piece around itself like a snake, so that you have a vaguely round shape, then set it aside.  Repeat this process with the other portions of dough.*

Place the skillet over medium-high heat and add just enough peanut oil to barely cover the bottom.  Take one of your coiled dough-balls, making sure the surface is still slightly oily, and roll it into a round (or round-ish) pancake.  When the oil in the skillet shimmers–you want it hot, but not smoking–pick up the pancake from the baking sheet and lay it gently into the pan.  Fry the pancake for about 2 minutes on the first side, until all the edges are opaque and the bottom is nicely browned, then flip and cook for an additional 2 minutes.  Meanwhile, roll your next pancake and have it standing by.

When both sides of your pancake are beautifully golden, it’s done.  Remove it from the pan and begin frying your next pancake.  Once all the pancakes are fried, cut them into wedges and serve with soy or ponzu sauce.  Don’t invite me over, or I will eat ALL OF THE PANCAKES.  You have been warned.

*If you want to roll out all the pancakes at once and then fry them later, you can stack them between oiled sheets of parchment or wax paper (yes, oil again–these buggers are sticky).  The unrolled, un-scallioned dough will also keep in the fridge for a few days, as long as it’s covered and–you guessed it–lightly oiled.