The unbearable lightness of food

Fact is, there are days when I feel compelled to do fancy things with food.  And then there are days when it’s ungodly hot outside, and I’m staring down the Workweek from Hell, and standing over the stove with an elaborate plan and a spatula sounds like torture.

Guess which kind of day I’ve been having lately?

Now, time for some heresy: I don’t much like raw tomatoes.  There’s something about them that gives me the willies.  So if I’m going to eat tomatoes on bread, they’ve gotta be exceptional.  Heirloom tomatoes are expensive as all hell, but considering that the rest of the ingredients are basically pennies apiece, they make a serious difference.  If you’ve got weird tomato issues like I do, spring for the fancy ones.  If you couldn’t care less, buy the regular boring ones.  Either way, your tomatoes are destined for greatness.

Oh, and for good measure, here’s another lazy cooking trick I discovered this weekend: balsamic vinegar reduction.  It’s stupid easy–put vinegar in a pot; simmer.  The result is some seriously potent stuff–sharp and spicy and way more fancy-tasting than it has any right to be.  Hot off the stove, it drizzles like heavy cream; after it sits in the fridge, it turns dark like molasses and oozes like chocolate syrup. 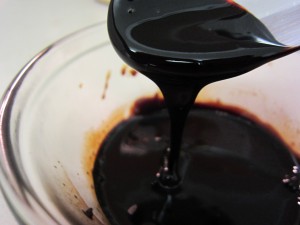 It’s ludicrous how versatile balsamic vinegar is once you turn it into a syrup.  It’s the needy attention-seeker of the sauce world: it adores everything from steak to strawberries, watercress to watermelon.  I used my first-ever batch as the finishing touch to a plate of manchego cheese and prosciutto.  That’s about as fancy as you’re ever gonna get with three ingredients, a knife and a pan.

In fact, I should have drizzled some over the bruschetta too.  Damn.  Maybe next time, when I’m a little less lazy.

Tomato Bruschetta (serves 6 as an appetizer)

A loaf of crusty French or Italian bread

Combine all bruschetta ingredients in a large bowl, and toss to combine.  Let it sit for a few minutes at room temp.

Preheat the oven to 350º F.  Slice the bread and lay the slices out in a single layer on baking sheets.  Drizzle the bread with olive oil and toast it in batches on the top oven rack, just until crisp, about 10 minutes.  (Don’t do what I did, and decide to rush the process by using the broiler instead.  That way lie burned bread and a kitchen full of smoke.)

While the bread is still warm, cut the garlic clove in half and rub the cut side on each slice, then sprinkle with Parmesan.  Top the bread with the bruschetta mixture, drizzle with balsamic reduction (below) if you like, and dig in!

Combine the vinegar and spices in a small saucepan.  Bring to a gentle simmer over medium-low heat and let bubble for about 15 minutes, or until the vinegar has reduced enough to coat the back of a spoon.  Remove from the heat and let cool briefly, before drizzling over just about anything you can think of.