My mama loves me; she loves me…

My mother is, without doubt, the most bestest mama I’ve ever met. She’s five feet tall, 100 pounds, and the purest example I know of the Mexican jumping bean in human form. She’s always moving, always doing, always thinking and wondering and checking up on business. She’s a bottomless well of unconditional love and nurture, mixed with a healthy dose of clear-eyed practicality. She’s endearingly, sometimes cringe-inducingly silly; she will regularly crack herself up to tears before even reaching the punch line of a joke. And she’s the only woman I know who has never given her firstborn child grief for the horrific length of time she spent in labor with her. (Sorry, Mom. I hope it was worth it.)

So of course, when Mother’s Day came around, I jumped at the chance to cook for her. I’ve written before about my impulse to shower people with love in the form of food. So I made dinner.

And, if I may say so, I knocked it out of the park. 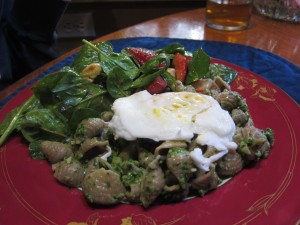 I started out this menu plan with a goal: to convince my mother she likes pesto. In general, both my parents tend to react with wrinkled noses and baleful eyes to anything with a whiff of richness to it. And traditional pesto is rich–oily, cheesy, nutty, and heavy. We’ve been here before.

But I had two secret weapons. The first is the knife method, which has fast become my most reliable ace up my sleeve. The second is the knowledge that pesto doesn’t have to involve basil. Not when my favorite stand at the farmer’s market–the one run by the cheerful tattooed young man with ear gauges the size of walnuts–has farm-fresh arugula for less than it costs at the supermarket. 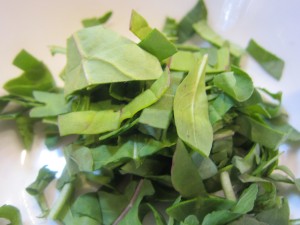 I used to think I didn’t like arugula. It’s not a wallflower lettuce green. It’s peppery, bitter, a little juicy and aggressive when it’s fresh. When it’s asked to carry a salad, it usually becomes the diva, blasting all the other shy performers clear out of the picture. But I’ve come to appreciate it in small doses–wilted on a hot pizza, tossed with a less assertive green for balance, or chopped to bits and tossed with hot pasta.

Arugula pesto is one of the infinite variations on the leaf-nut-and-cheese theme, and one of the most invigorating. I made it from scratch for the first time yesterday, swapping the traditional pine nuts for some lightly toasted almonds, and the result was a light, fresh, spicy, grassy, slap-your-cheeks-awake paste. And it came together without a hint of complaint from my chopping arm, thanks to my new-old-new favorite rediscovered kitchen gadget: my dad’s giant vegetable cleaver. Love that thing. 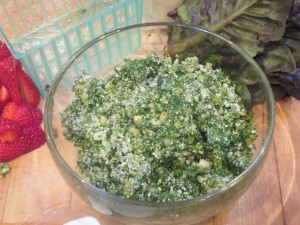 But, of course, there was one fancy flourish left. One of my nagging guilt-residues over pesto is the lack of protein. I do try to do this health thing, after all. I drew a blank on my options for protein-ifying a bowl of pesto pasta, short of making the kind of dairy-fortified creamy sauce that would send my parents running. This is, after all, a story about love of mom, not ego of daughter.

But then I had an idea. Pasta carbonara gets its body, not from cream or yogurt, but from eggs. I wasn’t about to go adding bacon and boatloads of cheese to my meal, but what about a poached egg on top? Just the kind of chef-y flourish that would impress my (admittedly captive) audience, and the creamy oozing yolk would cut the grassy bitterness of the pesto. Plus, I like poaching eggs–there’s something nearly zen about cracking eggs into water and watching them snuggle up, becoming little pearly pouches of luscious languid saffron-colored yolk. And then when I plunked the eggs on top of the pasta, that gooey golden yolk oozed down through the noodles and wound its way through the pesto. Smooth. Creamy. Yet, somehow, mysteriously light and springy.

IT WAS SO GOOD YOU GUYS. 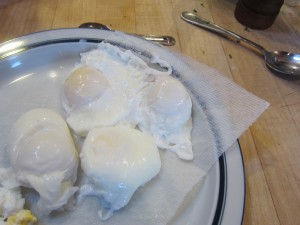 My mom, the pesto skeptic, cleaned her plate and then swiped the dregs from mine. My dad, who was nursing a nasty cold, cleaned his plate in record time. My brother claimed the serving bowl and ate the remaining pasta straight from the serving spoon. I’m telling you, if you have half an hour to make pesto the old-school way, and five minutes to boil some pasta and poach some eggs, make. this. dish. You’ll almost be tempted to put down a white tablecloth and charge $12 a plate for it. It’s that good.

A couple handfuls of slivered almonds

1 lb pasta of your choice

Toast almonds in a frying pan over medium-low heat, tossing or stirring frequently, just until they’re lightly browned and you can start to smell them. Remove and let cool.

Roughly chop the arugula and slice the garlic cloves. Pile a handful of leaves and a few garlic pieces in the center of a large cutting board, and use a large chef’s knife or vegetable cleaver to chop them very fine. When they’re teeny-tiny minced but not quite obliterated, add a handful more leaves and a few more garlic pieces, and repeat until you’ve incorporated all the arugula and garlic. Then chop in the almonds, a handful at a time, followed by the parmesan, a handful at a time, until you have a mixture that sticks to itself when pressed together. Transfer to a bowl and cover with the olive oil. When you’re ready to serve, stir to combine everything. (This is the same technique I wrote about here, if it looks familiar.)

When you’re just about ready to eat, cook the pasta and poach the eggs. Here’s my preferred egg-poaching method: heat a small pot of salted water just until tiny bubbles start to crawl up the sides, then adjust the heat so it’s on medium-low. Gently–gently!–crack the eggs straight into the water, one at a time. Poach the eggs for 3-4 minutes, checking every minute or so, until the whites are set and the yolks are slightly jiggly to the touch. Remove from the water with a slotted spoon and put them on a paper towel to drain for just a sec.

Toss the pesto with the pasta and divide among four plates (or, if you’re me, just dump it into a bowl and have everyone serve themselves). Top each serving with a poached egg. Cut into the egg and let that luscious, creamy yolk mingle with the pasta and pesto. Drooooooooool.