It seems I’ve turned my search for potato chip alternatives into a multi-part series. So let’s call this the Salty Crunch Saga, Part 2.

Once again, we start with leftovers. I had a few handfuls of grated Parmesan left over from making pesto, and not a whole lotta idea how to put it to use.  So it just sat in the fridge, for a week, slowly taking on the texture and general appearance of shredded Styrofoam.  Finally I pulled the bowl out and resolved to, y’know, do something with it.

I remembered, one time, long ago, some Food Network chef on some Food Network show had mounded grated Parm on a baking sheet and turned it into crackers.  Hmmm, I said.  I wonder, I said.  So I tried it.  The result was amazing, crisp and lacy and delicate–and it turns out the Italians have been in on this secret for eons. 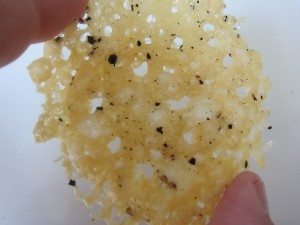 As I discovered, reading up after the fact, these shattering little Parmesan wafers are called “frico” in Italy, and they’re remarkably versatile.  If you let them cool flat, they become snackable or even garnish-worthy; if you mold them, still warm, over a cup-bottom or an overturned muffin tin, you get an adorable crispy cup, perfect for serving fancy-schmancy finger foods at your next party.  Y’know, should you be the adorable-cup type.  I’m not.  I just ate them.

I mean, these things are easy.  Brain-dead, ludicrously easy.  You-don’t-really-even-need-a-recipe easy.  Take grated Parm and drop it in little flat mounds on a cookie sheet.  I ground a little black pepper on top, just for funsies, then stuck them in a 350 oven until this… 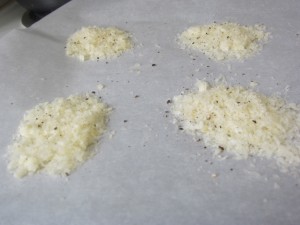 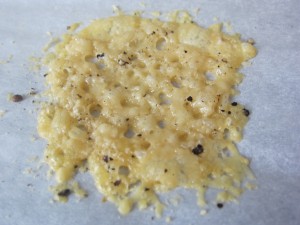 I let them cool until they hardened, which was by far the hardest part.  Then I put them away.  In my belleh.

When I went to the fridge for a drink to wash down the shattered-cheese fragments in my throat, I noticed the big hunk of white cheddar leftover from last Sunday’s lunch: so lush-looking and tempting at the farmer’s market that day, so wan and mild-mannered when we actually tried it.  The Parmesan success got me thinking.  Maybe all that poor milquetoast cheddar needed was a run across the grater’s teeth, a pinch of cayenne–maybe a little paprika–and a stint in the hotbox.

So then this happened. 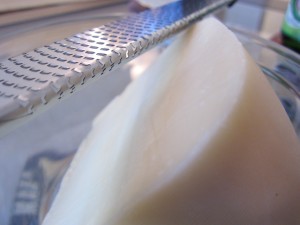 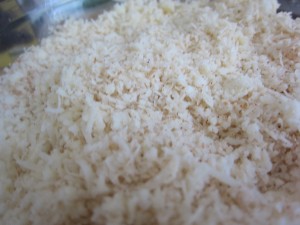 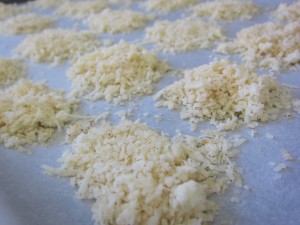 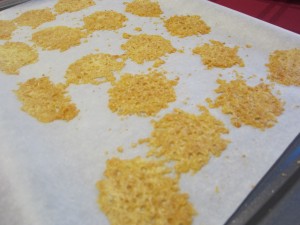 The cheddar crisps came out greasier than the parm ones–I had to give them a thorough pizza-style blot with paper towels.  They were heftier, too, chewy and thick in the middle and crunchy on the outer edges.  Call them frico’s brawny, brash American cousin.  Freako.  I quite liked them.

Fortunately, the rest of my posse did too.  Really, what’s not to like about crisp, lightly greasy cheese fritters, especially when they’re served alongside a hearty sausage sandwich and a glass of iced tea?  Even the leftovers got et within 24 hours.  Not bad for a potato-less chip that took approximately zero sweat beads’ worth of work.

Preheat the oven to 350º F.  Take a hunk of Parmesan or cheddar cheese, and grate it on the finest grater you have.  Season it to your liking–I used black pepper for the Parm, smoked paprika and cayenne for the cheddar.  Line a baking sheet with parchment paper and mound the grated cheese in little cookie-like lumps on the paper.  The thinner and flatter they are, the crispier they’ll get.  Stick ’em in the oven for 6-8 minutes, until they’re golden brown and bubbly and they smell like delicious tastes.  Pull them out of the oven.  (For the cheddar, it’s worth blotting off some of the excess grease.  I also salted them lightly when they came out of the oven–Parmesan is so salty it needs nothing more.)

If you want chips, let them cool flat.  If you want cups, mold them while they’re warm.  In either case, wait about 5 minutes and then have yourself a snack.

One response to “The quest continues…”